As we gather around our weekly Sunday campfire, campers receive patches for both participation and achievements…for her cabin, League and Somer Cup teams, climbing to the top of the tower, whitewater rafting, building a fire, starring in the talent show, or, the biggest honor, being recognized with one of our ring patches. As of today, we have nearly 50 different patches with more to come each year.

Every new Somerset camper arrives in Maine with the official Somerset navy blanket, featuring our red logo and embroidered first name. It will sit at the end of her bed and travel back and forth from home to camp each year, growing and changing as the summers pass, just as she does, and new patches get added.

While I’m not trying to rush anyone (trust me), sometimes I imagine years from now when a former Somerset camper and her daughter can bond over their blankets; comparing patches, sharing memories, and finding connections. The Somerset blanket should be the canvas that tells the story of a childhood spent at summer camp. And in this simple and everlasting garment, a girl will forever be reminded of the time she was a Bunny, the day she first water skied, slept under the stars, starred in a play, or the moment she discovered the true meaning of friendship. 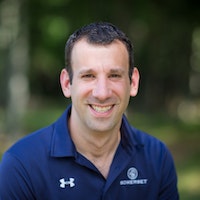 As a 18-year camper, counselor, and administrator, Josh is truly obsessed with camp. He spent his entire childhood at Camp Manitou for Boys in Maine and, for the past 12 years, has run the Manitou Experience, a non-profit summer program for grieving children. A former restaurateur, Josh is now living his dream as the full-time Director of Camp Somerset.